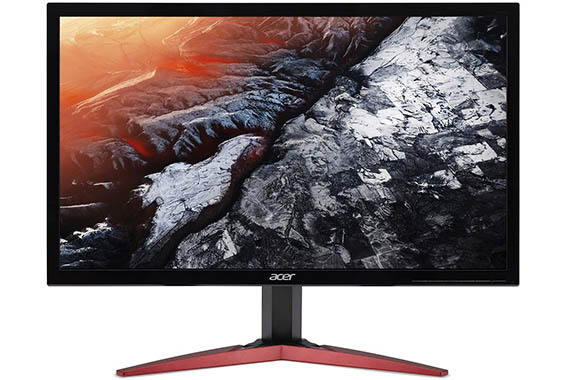 This monitor is all about speed (and affordable pricing, as we have already mentioned).

The monitor can show more than twice as many frames per second as the regular 60 Hz show due to its 144 Hz rate of refresh.

This means simpler and smoother movement that is especially evident in high-speed games such as shooters and racing games.

All video games without small frame rates will, in fact, benefit from a 144Hz so long as you have the correct FPS rates for the setup of your PC.

The quick response time of 1ms GtG is an additional asset of the Acer KG241Q P that ensures that there is no blur or trailing of visible motion behind moving objects which will allow you to concentrate on your targets.

The input delay is essentially half that of a 60Hz monitor so you can’t see delays while playing on the KG241QP screen with a delay of ~4ms.

When that is finished, the device supports AMD FreeSync (FreeSync Premium), which enables the display, whether a compatible graphics card exists, to dynamically adjust the refresh rate, according to frame rate.

This dynamic or variable refresh rate prevents all screen tearing, but does not have as much input lag as VSYNC, as long as the FPS rate varies between 48 and 144.

On that monitor FreeSync works up to 144Hz both on HDMI and DisplayPort, and while KG241Q P is not certified as NVIDIA-enabled G-SYNC, AMD’s FreeSync works without any problems in the DisplayPort usage of NVIDIA cards (GTX10 series or more).

Eventually, you will note the use of a flickerless backlight on the Acer KG241QP 144 Hz monitor and its low blue light filter to allow you to play hours without straining the eyes.