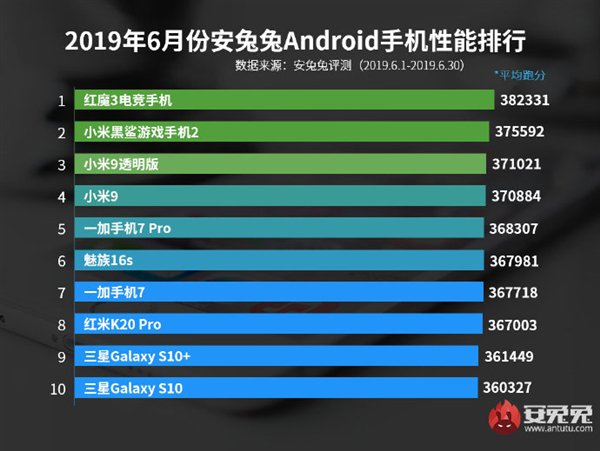 As is now the tradition, AnTuTu has released a performance-based list of its top 10 Android smartphones for the month, this time for June 2019.

The Nubia Red Magic 3 gaming smartphone tops the chart for June with a ranking of 382.331 points. The Red Magic 3 is the first phone to come with an integrated cooling fan similar to the one you’ll find in a PC on your notebook. Another gaming smartphone-the Black Shark 2-follows. Both phones are powered by the Snapdragon 855 processor provided by Qualcomm. All of the phones on the list actually have a Snapdragon 855 chipset under their hoods.

The Xiaomi Mi 9 Transparent Edition takes third place with a score of 371021 points while the standard Mi 9 is fourth with a score of 370884. The OnePlus 7 Pro and its 90Hz show claim the fifth spot to be in the top 5.

With 367.981 points, the Meizu 16S that manages to keep the bezels slim without rocking a notch or punch hole is at number 6. The overshadowed OnePlus 7 is at number 7 with 367,718 points, in what can be said to be a well-timed coincidence.

The Redmi K20 Pro is also on the list, entering the OnePlus 7 with a pop-up selfie camera as second handset. The Redmi K20 Pro marks the first time a Redmi device is going to make it into the top 10 list of AnTuTu and we are pretty sure it will not be the last one.