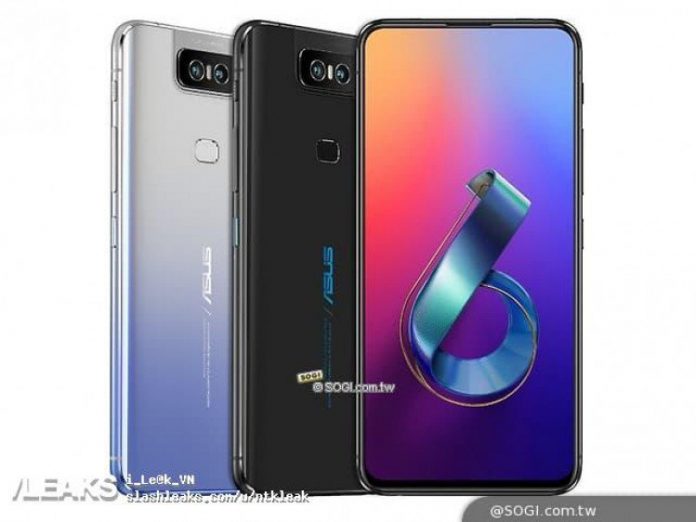 Tomorrow ASUS announces the ZenFone 6 series. The mid-range ZenFone 5 phone and flagship smartphone ZenFone 5Z had arrived with identical architecture. They did come with different internals, though. Accordingly, reports are rife that ASUS will launch the ZenFone 6 as a mid-range phone and a flagship phone could arrive with ZenFone 6Z or some other moniker. A Taiwanese tech blog has shared official renders of the ZenFone 6 ahead of its launch. Also, some more images were also shared by popular tipster Roland Quandt. The images reveal that the upcoming ZenFone flagship phone will be equipped with a notch-less and a swivel dual camera setup.

The ZenFone 6 smartphone is, as can be seen, equipped with a massive display with no notch. The device’s chin is slightly thick when compared to the other bezels. An earpiece can be seen on the phone’s slim-sized top bezel.

The ZenFone 6 lacks a selfie camera. The dual camera sensors mounted on the rear will flip towards the front by sliding down the display. The swivel camera module is said to be made out of liquid metal which reduces its weight by 20 percent and increases its strength fourfold. The back panel of the phone is equipped with a pill-shaped fingerprint reader. The brand name of the Taiwanese company can be also seen on the rear. The rear glass has a 3D curved design and with gradient texture.

The ZenFone 6 appears to be available in both Black and Silver-Blue colours. There is no confirmation as to whether both the ZenFone 6 and the rumored ZenFone 6Z flagship telephone would sport the same architecture.

The phone’s dual-camera swivel setup is rumored to be fitted with a Sony IMX586 48-megapixel main sensor and a superwide 13-megapixel lens. The handset is expected to arrive with a 5,000mAh battery carrying Quick Charge 4.0 fast charging technology in support.