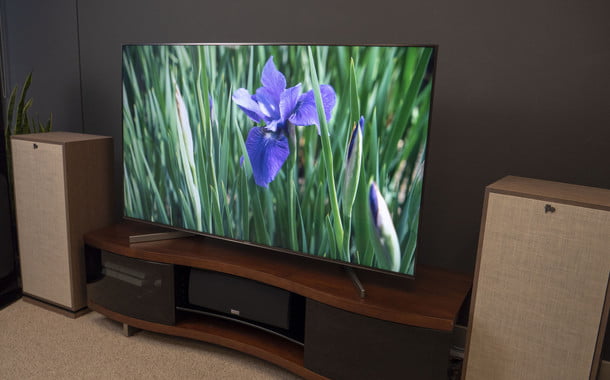 The Sony X900F was the best TV Sony produced this year until just a few weeks ago. I was fine with that because the X900F offered outstanding picture quality despite a price point which tended towards the midrange. Then the latest Master Series TVs were revealed and we worried for a moment that the X900F would be eclipsed. But once we saw the sticker price on new Z9F Master Series LED TV, it became clear that the X900F reviewed here would be the television most folks would want to shoot for if top quality pictures at an attainable price were their priority.

So how does the X900F stand up to the competition? Does it earn its keep? And what is it like to live with the TV? We spent more time than Sony probably would have liked with the X900F to get a deep look into whether this model might be the right choice for you.

Out of the box

Perhaps what makes the Sony X900F so beautiful is what it doesn’t try to do. The simple, sleek, and understated design of this TV is at the core of its appeal. Quality products are named with discretion, resulting in a high-quality TV without asking for excessive attention to itself. Ideally, the TV itself disappears when the TV is turned on and all you’re left with is an image. The X900F gets very close to that ideal thanks to its thin aluminum frame.

The brushed-metal feet that support the TV when it’s stand-mounted can be positioned with the toes in or the toes out. We’re not fans of how the latter option looks, but those short on entertainment stand surface area will appreciate the option to reduce the TV’s footprint.

What makes the Sony X900F so beautiful is what it doesn’t try to do.

The back of those feet offers a modicum of cable management channels, but there’s no other effort to keep wires in check as we’ve seen with some other TVs. Because the connection bays face down and out with no covers to the side, users will need to be creative if they want to keep things looking neat behind the TV.

The X900F comes with Sony’s voice remote, which is starting to look a little dated in comparison with the brands competing. While LG allows you to wield its remotes like a Wii controller, and Samsung’s slim metallic remote features precious few buttons, Sony sticks with an old-school design and layout that provides more buttons than you might need – save Google Assistant maybe for that voice button.

The ins, outs, and other fancy features

The X900F offers four HDMI inputs, all of which support 4K HDR sources and HDCP 2.2, but Sony tells us that you’re going to want to use HDMI 2 and 3 for high-bandwidth sources such as a 4 K UHD Blu-ray player, 4 K HDR-capable gaming console or HTPC / gaming PC. Unlike some of its competitors, the X900F won’t automatically detect the need for enhanced bandwidth support, so you’ll want to turn that feature on manually (instructions below). The X900F doesn’t support variable refresh rate (VRR) either, but then again, that’s a feature found only on Samsung QLED TVs at this time, so we don’t knock it for that.

Under the hood is Sony’s X1 Extreme processor, which is the heart and soul of this TV and really the chief reason one should consider it. You don’t think about it when you’re standing in front of one but that processor is responsible for the X900F ‘s glorious picture. The X1 Extreme makes the X900F look like a Sony, and from excellent color management to clean motion resolution for everything from games to 24-fps movies, that’s a very good thing.

When the X900F came out, it supported HDR10 and HLG for HDR processing. Sony has since released a firmware update that endows 2018 eligible Sony TVs with Dolby Vision HDR processing – you’ll get it when the TV updates automatically during setup. Bolstering the X900F’s HDR handling is Sony’s object-based HDR enhancement, which we find works remarkably in combination with the TV’s full-array direct LED backlighting system.

Sony is still sticking with Android TV for its operating system and streaming platform. We’ve got our gripes, which we’ll discuss later, but chief among Android TV’s bright spots is that it is natively Chromecast capable, which is a big boon for those who like to find content to watch on their mobile devices and then launch it on the big screen.

We give Android TV a lot of guff for being so sluggish – it’s one of the few pain points involved in owning a Sony TV – and often suggest folks purchase a Roku Ultra or Amazon Fire TV Cube for their 4K HDR streaming needs.Yet Android TV does have some advantages. Outside of the aforementioned Chromecast feature, we appreciate the simple process of setup that Sony’s system takes users through. Your passwords will still have to be pecked out, and so on, but the process is otherwise painless.

Confused about 4K Ultra HD TVs? We’ve put together this comprehensive guide to get you up to speed on just exactly what 4K Ultra HD is, and what it means for your next TV purchase.

Add to that the fact that Sony’s picture presets are among the best out there, and more users will find they won’t be tinkering around in the settings section for much more than a few minutes. Seriously, unless you are an exuberant videophile, you will  find Sony’s X900F delivers a very accurate, color-controlled picture with great contrast and suitable brightness from its Custom, Theater Pro, or Theater Home modes. Choose gaming mode for the lowest input lag available and then make subtle tweaks to get the picture right where you want it.

Since all TVs are different, we’re not going to make detailed picture settings suggestions, but we do have some very useful tips we think all users should heed when getting their TV up and running.

Starting with one of the aforementioned picture presets, first go into the External Inputs section, move down to HDMI signal format, and turn on enhanced format, presuming you are connecting some high-end 4K HDR sources to HDMI ports 2 and 3.

Next, go into Advanced Settings and move down to select Motion. Here, turn Motionflow to off and Cinemotion to high. This will eliminate soap opera effect and calm judder when watching movies.

We recommend Expert 1 for color temperature, because this is closest to the color level favored by calibrators, which will bring you closest to a professional setting without needing to employ a professional. If you find it looking a little too dry, you can try one of the other settings to zest the picture a little, but this will also affect the accuracy of the colour.

Lastly, most folks won’t need to go past 8 or 9 for brightness, except for a very bright room. Upon adjusting HDR mode, however, go ahead and go for maximum brightness. Although we suggest local dimming should go down to medium or low for non-HDR viewing, HDR mode also benefits from Auto Local Dimming set at high.

When talking about a TV as polished and as beautiful as the X900F, we think it helps to start by pointing out that in a few places you can buy more features and slightly better efficiency, but when it comes to LCD TVs, the X900F is one of the best deals out there. Sure, on the pricey side, it’s a little bit, but with this TV, we think you get what you’re paying for and that it’s worth every penny.

Sure, one could look to Vizio’s P Series Quantum and get excellent picture quality, but the user experience isn’t the same, you don’t get Sony-level picture-processing, and it costs more. TCL’s 6-Series offers astonishing quality for the money, but they don’t possess the color accuracy or processing chops you’ll find in the X900F, plus we found panel consistency to be an issue. Samsung’s Q7F is pretty compelling, and frankly, deciding between it and the X900F is going to be tough.

However, in the end, the processing of Sony does it for us. So, we’ll end up siding with Sony more often than not from a image quality standpoint. We never found ourselves disturbed by any photo abnormalities or irregularities during our viewing sessions. Hour after hour, we were welcomed and absorbed in the viewing experience offered by the X900F. It just felt like we were at home.

Off-angle viewing is not as strong as some of the most expensive TVs out there, but it is better than most of the LCD TVs we test today. Sure, you lose a little at extreme angles, but we don’t hear folks complaining about this much, if at all, and we don’t think you will, either.

A TV is about much more than its quality of image, and until Android TV stops hanging up and slowing us down when we’re trying to perform the most basic operations, we ‘re going to have something sad to say. It is painful for us to do so, but by leaving this criticism out we would be remiss.

Sound quality is another area where the X900F doesn’t do itself justice. While we’re blown away by the sound systems available on the new Sony OLED TVs, this one is pretty run-of-the-mill and requires at least a midrange soundbar so that the sound matches its picture.

Otherwise, the X900F offers a blissful TV-watching experience. For the money, you can do different, but you can’t do better.

Sony offers a 1-year limited warranty for the X900F. You can learn more about the warranty here).

Sony’s X900F offers some of the finest picture quality you can get without shelling out thousands more. With top-notch picture processing, accurate color, and excellent HDR performance, this is a 4K LCD TV that we’d be proud to have in our own living room.

Is there a better alternative?

The Samsung Q7F QLED TV offers some convincing user-facing features such as its One Connect panel, automatic source detection and zippy Tizen interface, but we feel that Sony’s local dimming system is better and that overall picture quality is only slightly more refined.

How long will it last?

8K TVs may be right around the corner, but they won’t be practical for a long time. The X900F is a wise purchase and will hold on to its value and provide stellar performance for years to come.

Should you buy it?

Yes. The Sony X900F is an outstanding TV, and if you value Sony’s approach to picture quality, this is the best available option for a price that won’t require a second mortgage.

How technology is changing the game of tennis