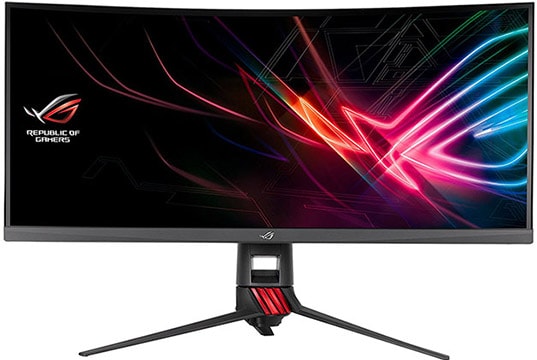 This feature can be enabled in the OSD regardless of whether you are using an AMD or NVIDIA card, although it only works at 85Hz and 100Hz at fixed refresh rates.

Moreover, when this technology is enabled the image becomes darker as the maximum brightness is reduced. Note that you can only use it if the monitor is attached through the DisplayPort input and the overdrive settings are not customizable.

While the Extreme Low Motion Blur somehow eliminates ghosting, it is still somewhat noticeable, particularly if you play fast-paced games with darker scenes.

Hence, if you primarily plan to play competitive and FPS games, we suggest that you get a gaming monitor with quicker response time.

However, the ASUS XG35VQ is absolutely perfect for RPGs and other graphically oriented games.

If you have a graphics card compatible with AMD FreeSync, you can also use the FreeSync technology on the monitor, which synchronizes the refresh rate to the frame rate of your GPU.

This will minimize all screen stuttering and tearing within the dynamic range which is 48-100Hz over both DisplayPort and HDMI 2.0 including LFC support on the ASUS XG35VQ. Remember that FreeSync can not operate with Extreme Low Motion Blur at the same time.

Update: Many people have encountered issues by using FreeSync with compatible NVIDIA cards, with the screen going black while beginning a video game. This can be fixed through monitor power cycling. Some users, on the other hand, do not report any problems in this respect. So the compatibility with G-SYNC will vary from unit to unit. NVIDIA would likely issue a driver update to fix that.

SSD vs HDD For Gaming