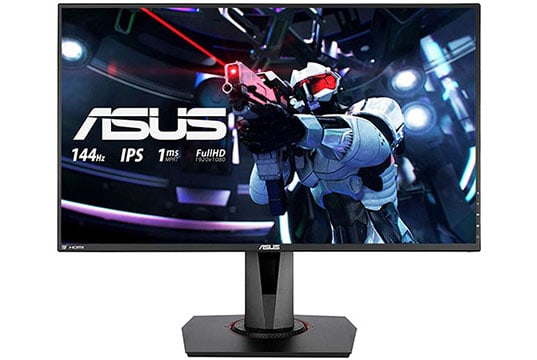 The IPS-panel ASUS VG279Q provides you with significantly better colors and viewing angles than TN versions as well as with no ghosting issues associated with VA models.

This is a small but significant improvement over this caliber’s previous generation IPS displays with a peak brightness of 300-350 nits and a 4-5ms response time of GtG (Blue to White pixel transition).

The only thing we don’t like about the ASUS VG279Q is its low pixel density due to the rather low 1080p resolution for its 27″ screen.

This means that on this display the image is rather pixelated, while a monitor version of 24′′ or 25′′ will have finer and clearer information.

This is not as noticeable in video games , especially when you are applying certain anti-aliasing effects. But if you also intend to use the ASUS VG279Q for work, you’ll have to cope with screen space limited and smudgy details.

The response time of 3ms (GtG) is more than adequate for a smooth fast paced gaming experience without prominent ghosting and motion blur.

Essentially, in addition to having vivid colors and large viewing angles of 178 degrees horizontally and vertically, you get a response time output which is on par with TN models.

Moreover, you can get a CRT-like motion clarity by using the exclusive ASUS Extreme Low Motion Blur (ELMB) backlight strobing technology. In order to enable it, you will have to set your refresh rate to either 85Hz, 100Hz, or 120Hz.

The performance of the ASUS VG279Q input lag is very good as well as about 8ms which makes the monitor easily fit for competitive professional gaming.

Last but not least, the display has no issues with visual glitches, dead pixels or excessive flickering in the backlight. There is some slight IPS glow that is anticipated from IPS panels and fully tolerable / manageable.

The ASUS VG279Q 1080 144Hz IPS monitor is also equipped with the support of AMD FreeSync / Adaptive-Sync which allows the monitor to dynamically change its refresh rate thus eliminating all screen tearing and stuttering with basically no input lag.

This technology requires a graphics card compatible with AMD FreeSync and it works within the refresh rate range (VRR) variable 40-144Hz / FPS (Frames Per Second). The adaptive-sync also works with NVIDIA 1000 series and 2000 series GPUs (and newer) without any issues on this monitor.

Additionally, LFC (Low Framerate Compensation) is supported which will ensure a smooth performance even south of 40 frames per second.

While the ASUS VG279Q 1080p display has a flicker-free backlight (unless 1ms MPRT is enabled), and an integrated low-blue light filter, we noticed that gamma presets and color hue settings are missing in the OSD (On-Screen Display) menu.

The price of the ASUS VG279Q is around $330 which is reasonable given its price and features.

Check out the AOC C24G1 and C27G1 models with curved VA-panel 1080p 144Hz 1ms (MPRT) screens though if you’re looking for something similar but more affordable. These are less expensive, offer higher contrast, but in fast-paced games they also have more ghosting.

There is also the Acer VG271 which is built on the same panel and has the same features as the ASUS VG279Q and HDR support at the entry-level, but it has a tilt-only stand. It is slightly cheaper, too.

Check out the Nixeus EDG27S v2 which is an outstanding 27′′ 1440p 144Hz IPS gaming monitor in case you can afford anything more pricier.

While many would find 1080p simply too small for a 27′′ screen, the ASUS VG279Q is certainly a step in the right direction as gamers who are limited to 1080p and 144Hz can finally opt for an IPS edition now.

Ideally, with smaller 24′′-25′′ displays as well as with G-SYNC modules we can see similar versions in the future too.

The ASUS VG279Q is a much awaited gaming monitor. It combines vibrant colors with wide viewing angles and a fast response time. Additionally , it provides plenty of useful gaming features and a truly ergonomic design at a fair price.